Kingsland is an island based on the medieval era. It is a beautiful forest landscape, brimming with bright green grass and trees. The island is home to the The Black Baron, King Kendric and their respective castles and people.

Kingsland connects to The Enchanted Island via a bridge. It lies to the north of Technopolis and Gunpowder Island and to the south of The Lost World.

The Castle of the King[]

This is where most of the action in Kingsland takes place. It is a large castle, made mostly of stone, with brick rooftops and decorated with banners. It is surrounded by a forest. The castle is home to the following characters: King Kendric (its ruler), Prince Alex (the king's son), Princess Leonora (the king's daughter) and the knights of the kingdom, with Sir Ulf, Sir Gareth and Sir Archibald being the most notable. Fourchesac also has a laboratory here where he brews potions although he is mostly seen elsewhere.

The Castle of The Black Baron[]

This is a minor location in Kingsland although it does appear in a couple of episodes. Much like the king's castle, it is made up of stone but has a different color scheme, with dark bricks as opposed to orange and red banners as opposed to yellow. This castle is home to The Black Baron (its ruler), Rypan (the baron's right hand man), The Colossus (a metal juggernaut) and the rest of the baron's troops. Fourchesac makes quite a few appearances here but it is unknown if he resides here.

Dragon territory is a small, deserted wasteland in the north of Kingsland. Since it is inhabited by many fire-breathing dragons, the air is hot and humid.

The Golden Teapot is very important for the people of Kingsland. It is said that whoever possesses the golden teapot becomes the king. This is why The Black Baron is seen on numerous occasions trying to steal it - as he believes it is the best way to overthrow the king. It is also said to possess great magic powers, making it a valuable target for magic users such as Fourchesac and Baba Cara. Remarkably, despite it's supposed magic power, it can still be used as a regular teapot.

In the library of King Kendric's castle, hangs a map of the world. All five islands in the Super 4 series are shown on this map: The Lost World in the top left, Gunpowder Island in the bottom right, Technopolis at the very bottom, with Kingsland and The Enchanted Island both connected in the middle of the map.

The Sword of Power[]

This line from the episode "Convoy of Honor" highlights the importance of this sword to the people of Kingsland - it is imperative for King Kendric to brandish his sword at sunset or else he risks losing his throne. This, as with the golden teapot, makes it another valuable target for The Black Baron due to his aspirations to become the king.

Name in other languages[] 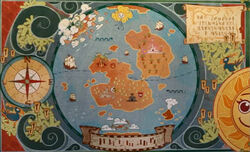 The map of the world 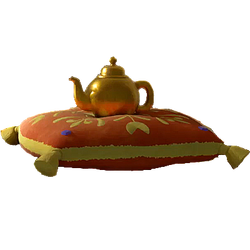 The Sword of Power on a cushion

The Black Baron's castle (side view)

The Black Baron's castle (view from above)